Here’s a early recording of 8444 high-balling out of Kearney, NE…
Recorded: September 21,1988 on a Marantz PMD 420 with a pair of EC7 mics.
Audio courtesy of Rick Zorko

Wednesday March 23, 2012
I packed my gear and headed North to Blair NE, hoping to catch UP 844 crossing the old iron truss bridge that spans the Missouri river into Iowa (probably for the last time as this bridge is due to be widened within the year). 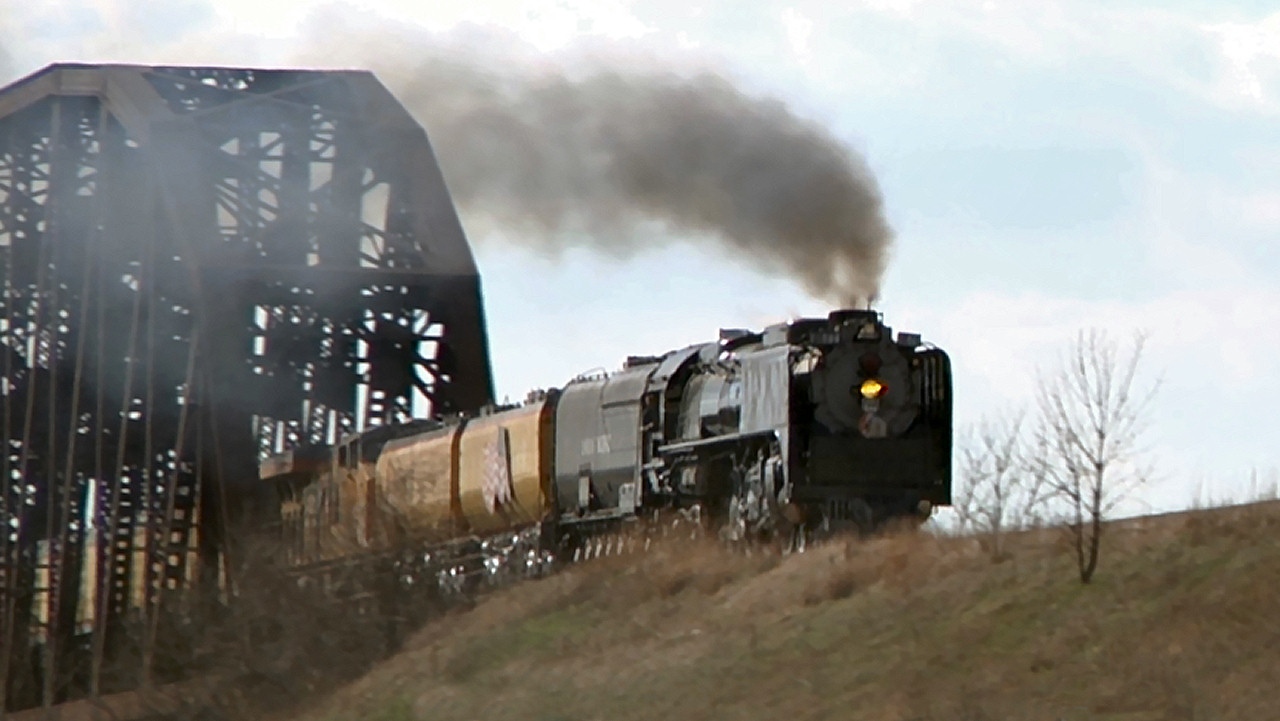 The weather was “Picture Perfect!” and I knew there would be a ton of people out trying to get shots of 844, so finding a quiet spot to record was going to be difficult! I ended up shooting a quick video as it crossed the bridge then I headed south down to Honey Creek, IA hoping for a better spot to get some audio recordings. I didn’t expect 844 to make much noise because he was running with such a light load.

Field Notes:
Honey Creek, IA: I walked down the tracks a good 300yds from the crossing and set up with the mics pointing towards an open field to try and minimize the sounds of road traffic behind me, which can still be heard as he approaches. Record levels were set at 5.

Video of 844 crossing the bridge at Blair, NE and passing through
Honey Creek, IA

UP 844 was scheduled to leave Council Bluffs, IA at 8:00am for it’s trip south to Kansas City, MO. Rick, a good rail-fanning friend of mine, and I planned on chasing 844 South to Nebraska City. First stop was Plattsmouth, NE where 844 would be climbing a nice grade out of the Platte River basin.

Here’s a couple of photos of me and the setup in Plattsmouth, NE… 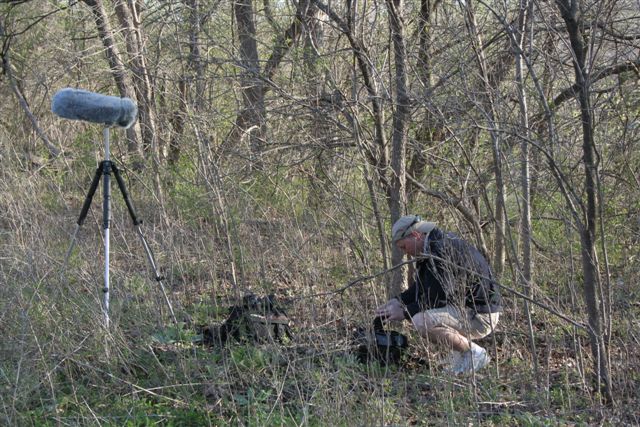 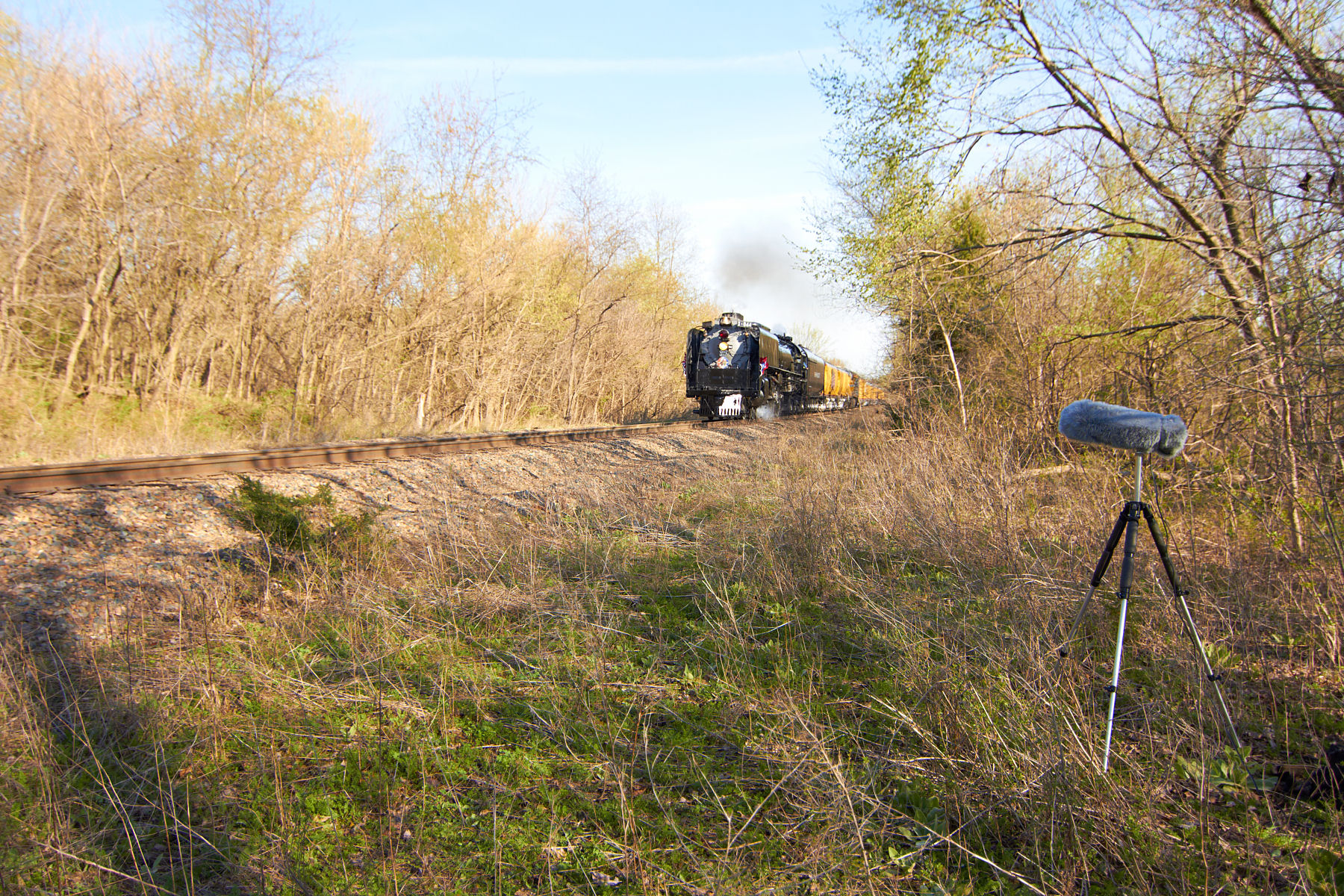 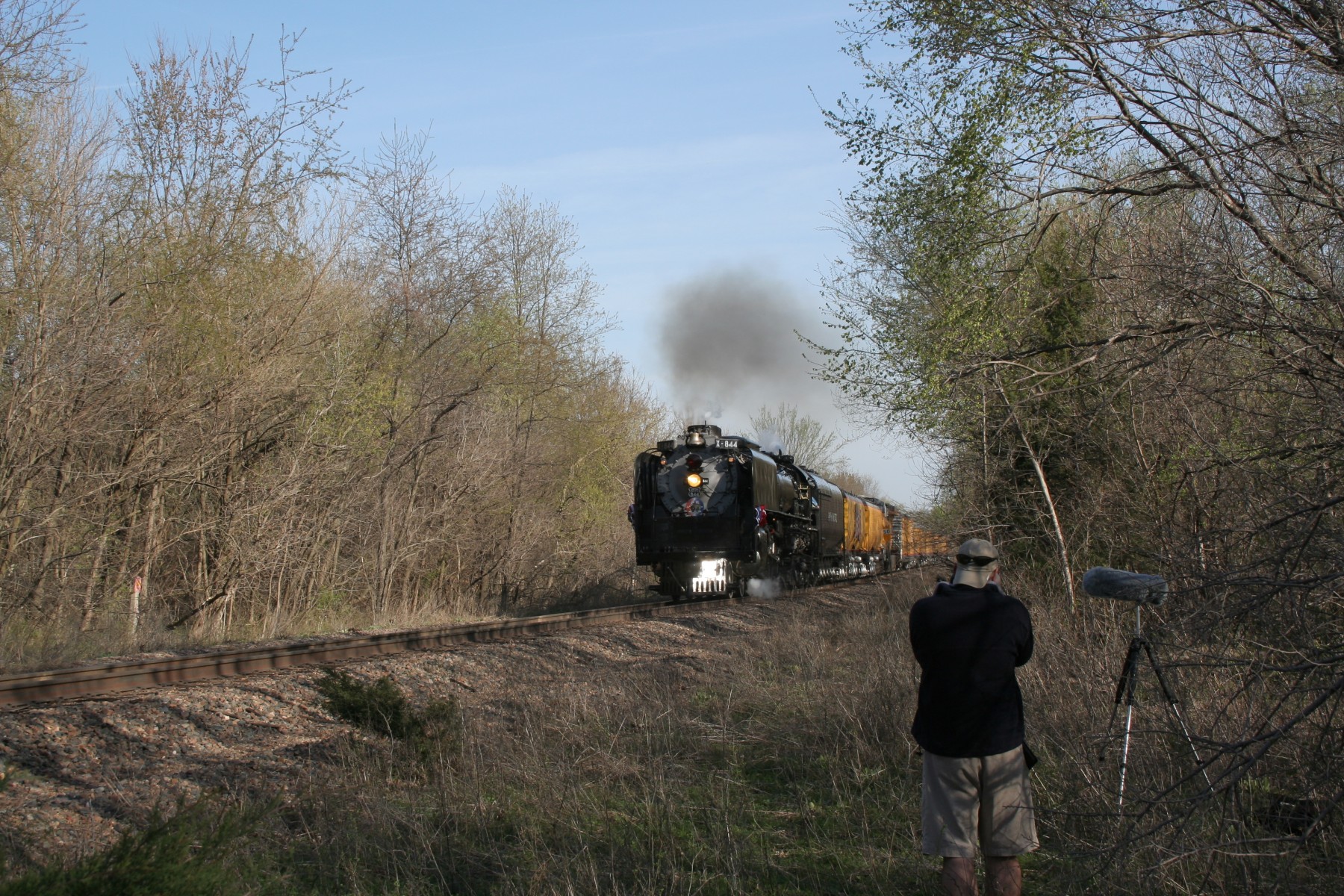 Field Notes:
Rick had the location picked for the Plattsmouth recording. On any other day this would of been a killer spot! The winds were light out of the SSE just enough to pick up traffic noise from town. Plus there was a group of people at the top of the hill cheering like the Huskers just scored a touchdown! We set up towards the top of the grade just far enough away from a crossing so we could get a good recording of 844 without him blowing right on top of us… have a listen to the recording below.

Last stop was Nebraska City, NE. Pulling onto Hwy 75 South we got caught in the entourage of cars trying to pace 844… luckily, most turned into town as we kept heading south so we could setup for the next recording of him climbing the grade out of town. 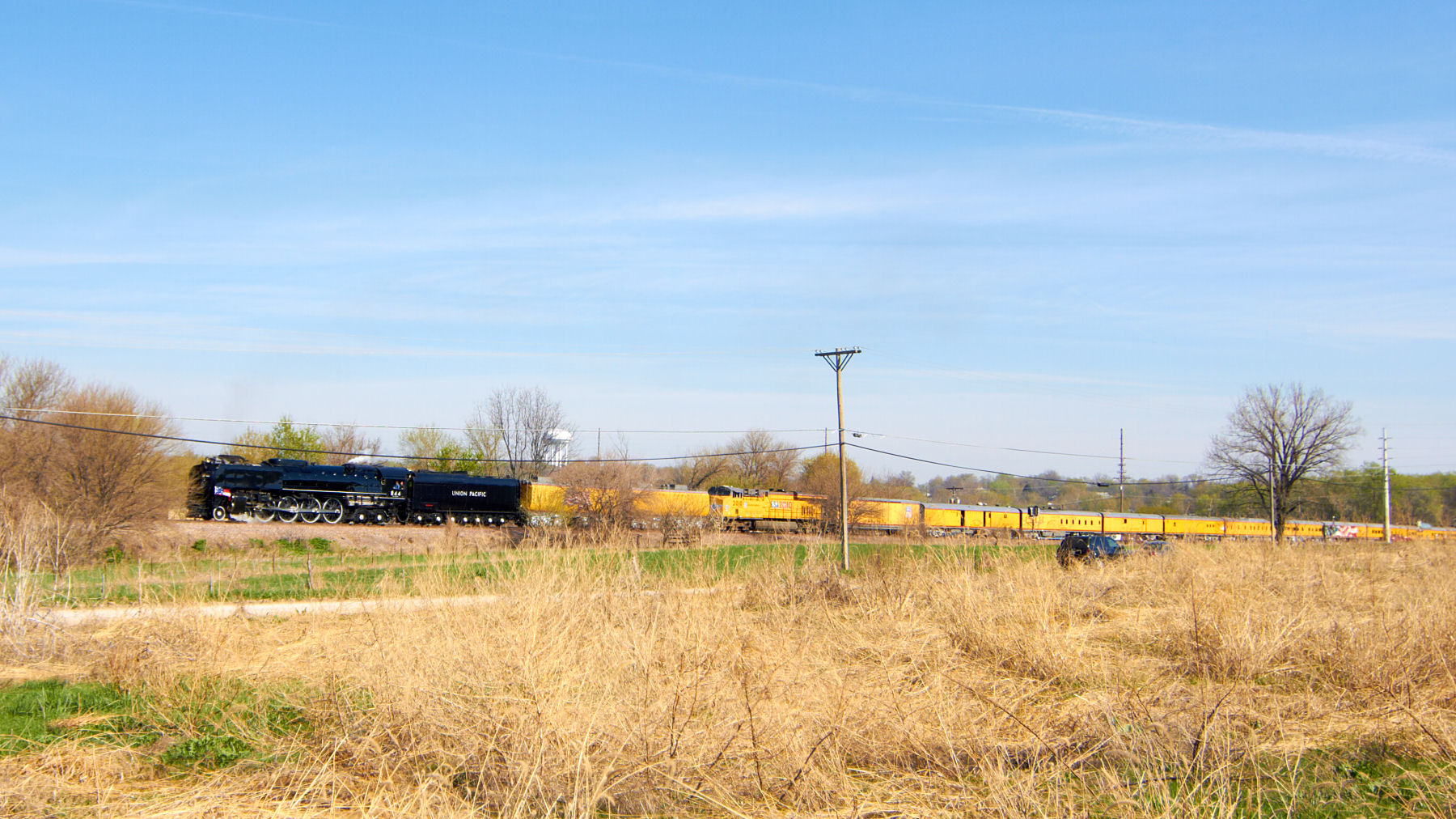 Field Notes:
We set up on the south side of town in a field several hundred yards from the track and the crossing. This spot was perfect for recording… we were far enough away from the crowd and knew 844 would have a nice long climb out of town with lots of “Stack Talk” without blowing the whistle right on top of us. This allowed me to crank the recording levels up to around 6!

This would of been a fantastic audio recording of 844 if they hadn’t stuck the GE-C45AC 2010 BSA Heritage locomotive in the consist! Don’t get me wrong… I love the throaty sounds these GE units make, just not mixed with the beautiful sounds of steam! You can hear the diesel engine drown out the stack talk at around 4:15 in the recording. In fact, the last several times 844 has passed through it’s had a diesel loco in the consist so the days of getting a good, clean recording of 844 may be a thing of the past!

While in Nebraska City, we went to check out the old Burlington Station on the SE side of town. This station, although now vacant, is in remarkably good condition for it’s age with it’s beautiful brick exterior and art deco design. 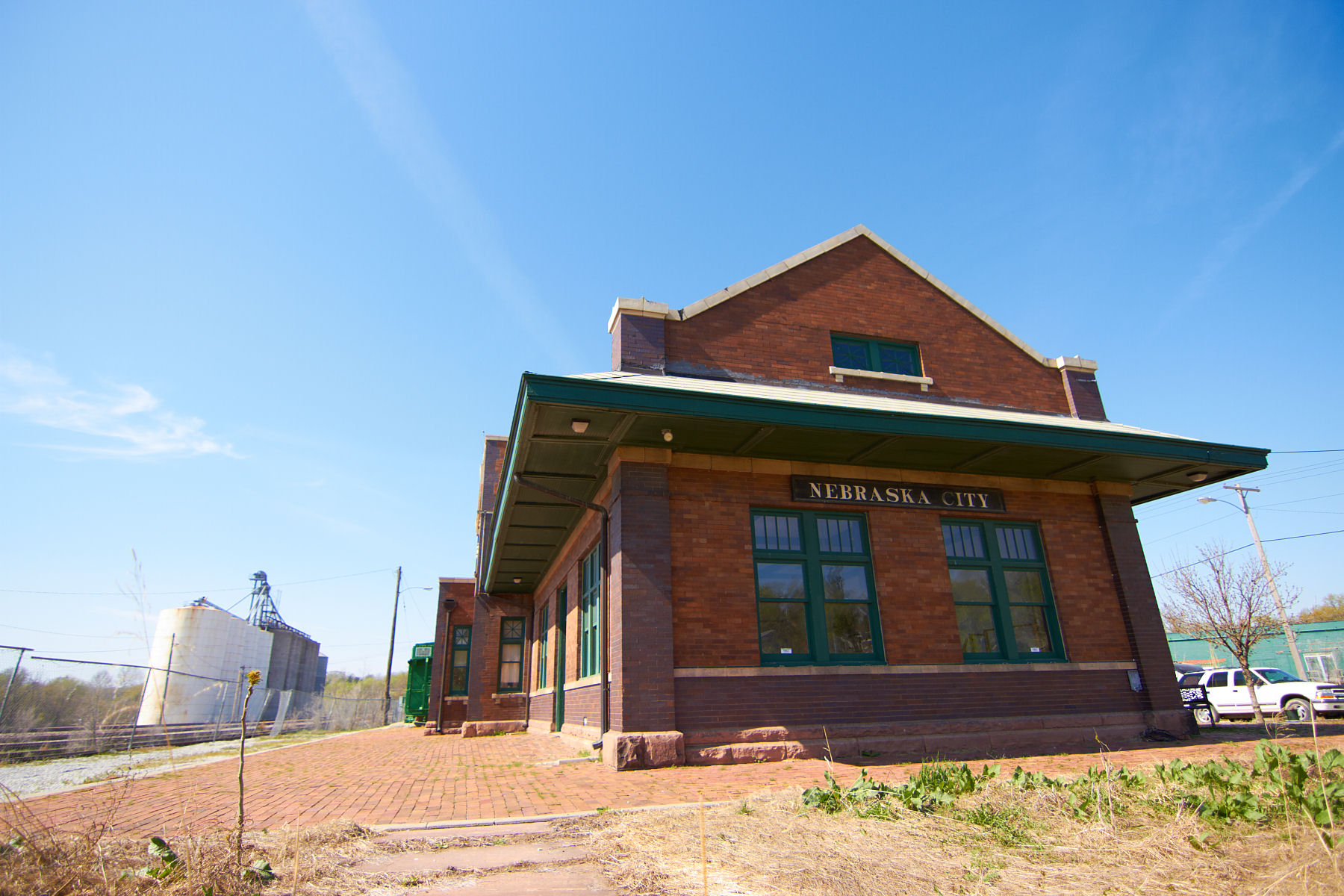 On the west side of town was this beautiful dilapidated grain elevator… the mainstay of many of these small towns. What a great building to model for my HO layout! 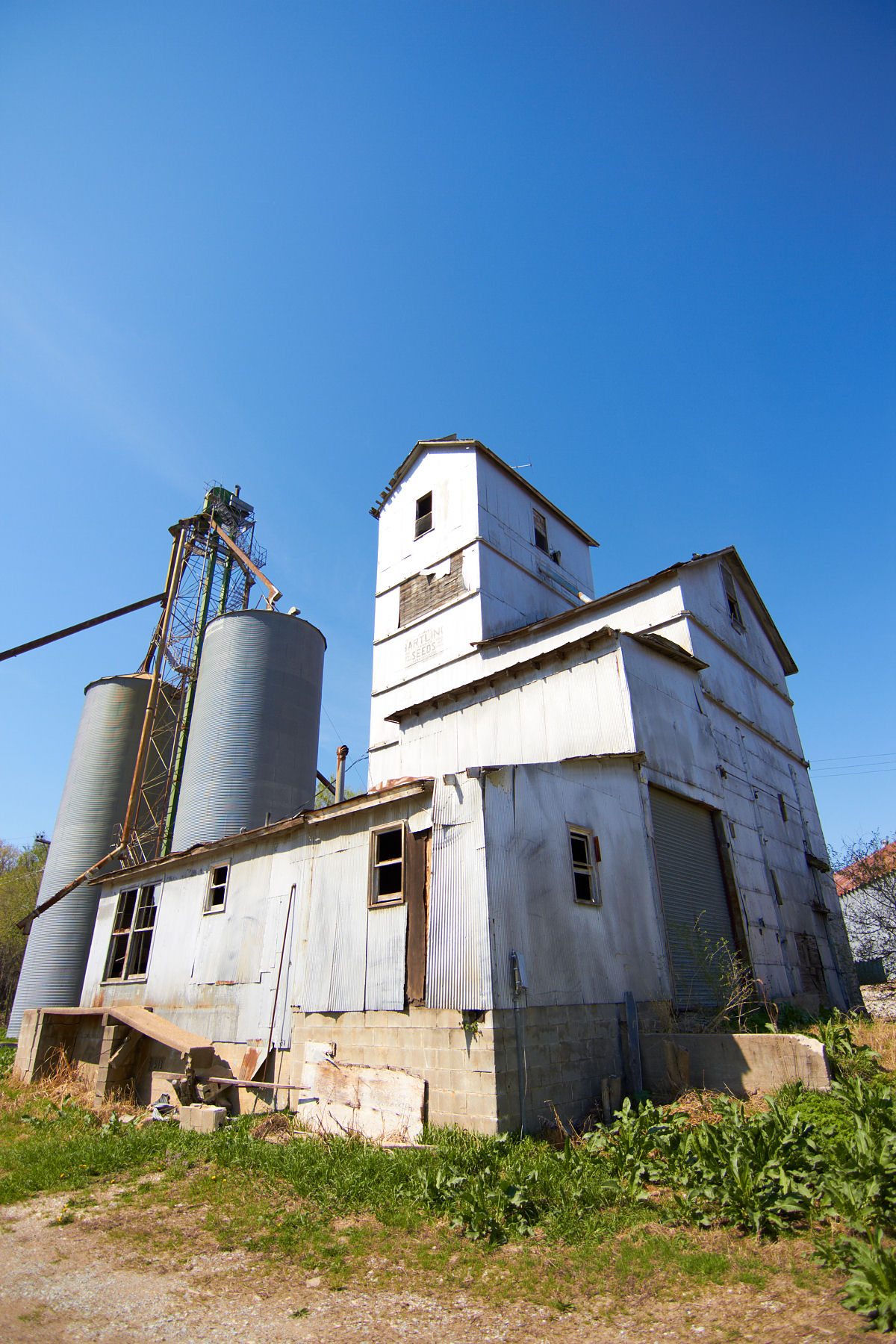 I love recording trains! From a sound recordist standpoint, recording train sounds is probably the most demanding thing your equipment will go through (except maybe a thunderstorms). Your recorder needs clean preamps with a low noise floor for recording low ambient sounds and your mics (internal or external) need a high Signal to Noise ratio and SPL level to handle the extreme differences in sound.

One thing I have noticed with the Marantz PMD661 & AT-BP4025 mic setup I’m currently test is the recorder is quiet enough to bring the gains up for the low ambient sounds and the mics hold up very well under high SPL without collapsing. This little bit of headroom in both the mic and preamps make a big difference in the final recording!

Want to see how well your equipment holds up? Go find a active track near you and set your recorder up 20 to 30 yards back from the track on the downwind side of the crossing. Set your record levels so birds and other ambient sounds are at normal levels. When the train approaches with whistle blaring, watch your levels… make small adjustments so the recording doesn’t clip or peak. Now that you have a set level for the high SPL, check again for the ambient sounds. If after setting your levels for the whistle you can’t hear birds or other sounds then this means your mic isn’t sensitive enough. On the other hand, if you set everything and the recorder didn’t clip but sounds distorted when you play it back then the mics can’t handle the high SPLs. In either case there is a solution… move further away from the track and or the crossing.