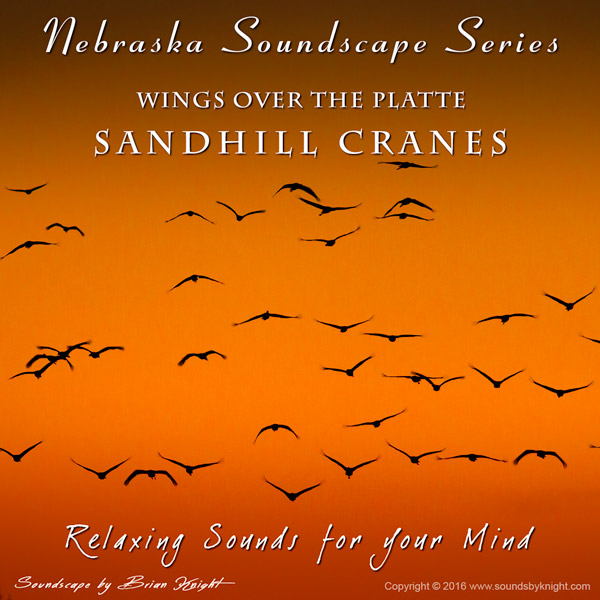 Each spring central Nebraska gets to witness one of true wonders of the natural world… the spring migration of the Sandhill Cranes. Hundreds of thousands of cranes descend upon Nebraska’s Platte river basin between Karney and Grand Island to rest and feed before heading north to mate.

In late March 2014 I made the trek west to record & photograph this wonderful event. I spent 4 days in the field capturing the haunting voices of the cranes as they make their way back to the river for the evening. 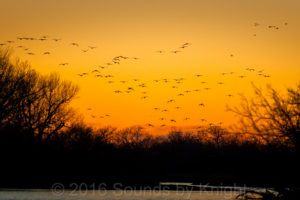 Two versions of this release will be available…

“Wings over the Platte – Sandhill Cranes”

This album (available in both MP3 and CD) will be a 60 minute recording filled with the beautiful sounds of the Sandhill Cranes as they fly to the river for the evening…. first in small groups then by the thousands as the cranes fill the skies above the Platte.

“Songs of the Sandhills”

This album (available in both MP3 and CD) will feature one continuous track 60 minutes long starting with Morning Songbirds fading into the Cranes flying in for the evening and ending with the sounds of Frogs and Crickets.

We will also offer a 60 minute (CD version only) with three different tracks starting with Morning Songbirds, Cranes over the Platte and Evening Frogs. This will be for folks who would prefer to listen to one particular track at a time.

We’re hoping to have “Wings over the Platte – Sandhill Cranes” and “Songs of the Sandhills” in our lineup by mid summer 2016. But if can’t wait to hear it, we have a sample of the Cranes for you to enjoy from our SoundCloud page…

We hope you will enjoy this “Nebraska Soundscape Series” as much as we have in recording it!
Let me know what you think,
Brian Knight